Described as a cross between the jazz-rock-art style of Frank Zappa and the psychedelic punk of the Meat Puppets, Ten Hands is known for their energetic and fun live shows. Born from Denton, Texas, in the mid-1980s, 30 miles north of Dallas, Ten Hands is once again pleasing crowds in their home state. Their music tends to be frenetic, syncopated and funky. Matched with Paul Slavens’ vocals, and political assertions that denigrated the ruling elite, the complacent middle class, and environmental evils, Ten Hands have been one of the more politically oriented Texas bands of the era. They rarely forget to be fun, however, and their musical playfulness and lyrical absurdism belie any pretensions they may have. 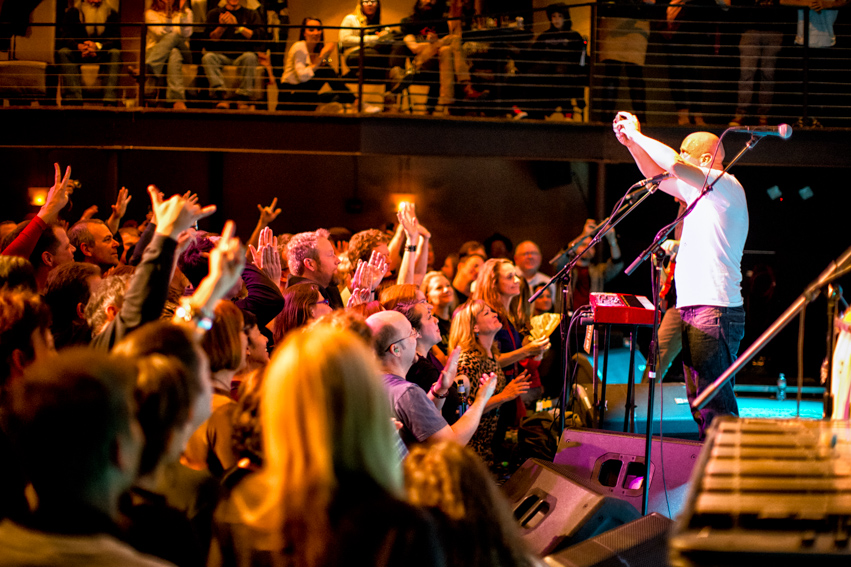 Sometime in late 1986, Mike Dillon, Gary Muller, and Matt Chamberlain were playing in Dallas-based band Zane Grey, who appeared on Star Search. Meanwhile, Steve Brand and Slavens were playing in a Denton band called the Gonemen. Dillon, Muller, and Chamberlain lived in the same Denton house as other members of the Gonemen, and when dissatisfaction with both groups began to appear, the idea for a new band was spawned.

The first Ten Hands rehearsal took place in late 1986 in Denton. Shortly thereafter, Zane Grey’s manager, Tony Johnson, accepted an offer to manage the fledgling band. For the first year, Ten Hands played mostly small venues in Denton and performed a weekly gig at the Prophet Bar, a seminal Deep Ellum club in Dallas. During this time, a studio recording was made and handmade cassettes were sold and distributed in and around the Dallas, Ft. Worth, and Denton area.

Chamberlain and Dillon were already well known in Denton as top players in the University of North Texas Jazz program, and interest in the band soon grew. It was also during this time that the New Bohemians were becoming a major draw in Dallas. It happened that several members of that band were friends with a few Ten Hands members, and ultimately, New Bohemians offered some opening slots to Ten Hands at Deep Ellum’s celebrated Club Dada. The Club Dada shows helped expose the band to a much wider audience, and the venue would later host many of Ten Hands’ most memorable performances.

In late 1988, Earl Harvin joined the band as drummer after Chamberlain left to join New Bohemians. The band went into the studio to record “Kung Fu…That’s What I Like“. As New Bohemians vacated Dallas for bigger and better things, Ten Hands stepped in to fill the void and began what would be a three- or four-year run as one of the region’s most popular draws. The band won numerous Dallas Observer Awards in 1988-1989, and shortly after the release of their first live CD, “The Big One Is Coming“, and sold over 20,000 copies. Mike Dillon moved on to form Billy Goat. Joe Cripps joined the band to replace Dillon on percussion.

Earl left the band to play with Mike Dillon’s Billy Goat and “Big” Al Emmert stepped in as drummer. With some new sounds and some new tunes, Ten Hands started to tour and built a following with college audiences.

At a SXSW performance, the band was offered a record deal by an independent label Slipped Disc. Desperate to release an album after two years of inactivity, the band agreed and began work on Be My Guru in late 1991. The band toured in support of this record over the next year until the relationship with the label ended.

The band needed to go back in the studio, so friends of the band, Byron and Janet Wilson, offered to produce a CD on their label Clubland Records. “Jazz for Jerks” was recorded in early 1992 with the assistance of the band’s friend and longtime collaborative producer, David Castell.

Steve Brand left the band in 1993. New guitarists, Chris Claridy and Chad Rueffer joined and the band wrote some new songs and continued to gig around the area. In the next incarnation, guitarist, Ed McMahon, and drummer Greg Beck were hired. After the band took a break, a few “reunion” shows surfaced throughout the 2000’s.

In 2014, Ten Hands started to play regularly again in the Dallas area and in Austin, with the Slavens, Brand, Muller, Emmert and Dillon lineup. Ten Hands continues to play, with various lineups, several times a year, based in the Denton, Dallas area.